View source
watch 02:56
Raise a Floppa - The Loop
Do you like this video?
Play Sound

All Over the Map

Beached things (BTs) are entities whose souls are stranded in the world of the living following the events of the Death Stranding. BTs are considered extremely dangerous and are almost invariably hostile toward living things. Because the bodies of BTs contain antimatter, if they consume a living thing, a voidout will be triggered, causing a massive explosion capable of destroying entire cities.

A beached thing comes into existence when the deceased soul of a living thing fails to cross through the Beach into the world of the dead, consequently becoming "stranded" in the world of the living, with their connection to the other side maintained through an umbilical cord. The Death Stranding occurred concurrently with the first recorded sighting of a BT by a doctor performing a Caesarean section on a brain dead mother. Due to the Death Stranding, when a human being dies, their "ka" (soul) is still connected to and will attempt to return to their "ha" (body) after death. The only way to prevent this is to destroy the body, usually through cremation at an incinerator; if this is not carried out, the ka will return to the ha and then become a BT, stranded in the world of the living, risking a Voidout.

BTs can be perceived by individuals suffering from DOOMS, or via a trance connection to bridge babies, which exist between the worlds of the living and dead. The extent to which DOOMS sufferers can interact with BTs varies; Sam is capable of sensing BTs, but cannot see them without the assistance of Lou. Fragile, meanwhile, is capable of seeing BTs without aid. With a DOOMS level of seven at minimum, Higgs is capable of not only seeing BTs, but also controlling them at will.

It is never clear if the Beached Things are all stranded human souls, native entities to the 'other side', or a mixture. It is safe to assume that Gazer-types are all the result of human deaths, but very little is explained regarding the nature or origins of the larger BTs. Higgs' Collosus, however, would seem to be an entity that is entirely of his own creation and under his control, suggesting that it is at least possible for BTs to arise from sources other than human death. It is likewise unclear if the BT's behaviour is predatory or not: The grappling and grasping of Gazer-type BTs could be interpreted as a desperate need for physical contact, or even a plea for help. Heartman at one point speculates that the human hand-prints that appear during close encounters could be interpreted as the BTs reaching out to us.

A very rare case is a BT baby connected to a living woman. This was the condition of the scientist of Bridges Målingen (AKA Mama) whose baby dies in childbirth while still connected to her by the umbilical chord. The result was that Målingen has to live isolated to avoid any contact with another BTs. However, her BT baby by itself was inoffensive and had some curious behaviors like feeling hungry and sleeping.

An intriguing aspect about this case is that Mama was technically dead; She didn't have pulse and her skin was cold all the time, but was still able to talk, think and interact like any other person. Somehow the BT baby kept her in a limbo between the world of the living and the beach. She can even produce milk even though her baby cannot drink it.

Sadly Mama dies shortly after deciding to cut the link with the baby for various reasons. But curiously her body doesn't necrotize, because the connection with the BT baby filled her cells with Chiralium.

Another curious case is Cliff Unger (AKA Combat Veteran) who having died, returns to life in human form and with improved abilities, as well as being able to control ghostly entities remotely. Its not sure if Unger is a BT entity, but how it came back to life avoiding to become a conventional BT is a complete mystery. But something that is certain is the aggressiveness of Unger as well as his ghost soldiers.

It is speculated by various Bridges experts that when a person dies with great hatred and unresolved issues, can come back to life in a spectral way. Which would explain the return of Cliff and even more it confirms the existence of ghosts throughout human history, since these kinds of appearances were believed to be legends and myths before the Death Stranding.

Gazers are floating humanoid BTs which manifest in areas showered in timefall; their presence is indicated from a distance by spectral black strands in the atmosphere above such areas. They come in two forms: adults and infants. Gazers sense by sound, and are unable to detect Sam while he is either immobile or holding his breath. If Sam holds his breath, however, he will be unable to see nearby gazers and only regain the ability to do so after breathing and remaining still again.

Gazers can be temporarily immobilized with a shot from a bola gun infused with repatriate blood. While immobilized by a bola, gazers will remain visible to Sam even while he is moving. Hematic grenades can drive gazers back to the other side, after which chiral crystals will materialize beneath where they floated. The odradek also detects the next nearest BT, if any, as a result, showing that the targeted gazer has been killed.

If Sam cuts the umbilical cord of a gazer, they will be driven back to the other side. After doing so, the BT will give Sam a like, possibly implying their beached state is uncomfortable for them, and being untethered grants relief.

Gazers will investigate and slowly glide towards any disturbance that happens near them. Upon detecting a target, gazers will hone in on the source of the disturbance; this is visually identifiable as tar handprints moving towards the sound. They are sensitive to the sound of breathing when close to a target, and if Sam's breathing is not held, they will rapidly approach him.

If a hunting gazer reaches Sam, a pool of tar will manifest beneath him, and a group of gazers (possibly those from nearby) will reach out and attempt to drag him down into it. Sam can shake them off and flee to the edge of the tar pool. The tar gazers can also be repelled through use of anti-BT weapons such as EX grenades, hematic grenades, or even timely urination. If Sam escapes their grasp, the hunting gazers will soon after vanish for a time. Should the gazers succeed at pulling him down, they will drag Sam away into a confrontation with a catcher.

If Sam has triggered a voidout in a given area, and there are no areas suitable for a catcher confrontation, normal black gazers will be replaced with golden ones, which will instantly kill him if he is caught. Golden gazers also appear in certain areas and catcher battles.

Catchers are large BTs that appear when Sam is dragged away by gazers. They have a core of antimatter from the other side within them. As such, if Sam is eaten by them, it will react with his matter and explode in a voidout. Catchers form an arena of thick tar in which old buildings, vehicles, and rubble constantly emerge and sink. Sam must either destroy the catcher or flee to the edge of the arena. If he flees, the catcher will become caught on the edge of the arena and disappear into the tar, which will then evaporate, and all BTs will vanish from the area for a short time. Upon being defeated, catchers will crystallize before evaporating with the nearby tar, all BTs will leave, and a large amount of chiral crystals will form on the ground. Defeating or fleeing a catcher will cause timefall to stop for a short time.

Higgs can manifest a colossal humanoid BT capable of catching living beings in an attractive force and devouring them, in turn triggering a voidout. The voidout triggered by this BT devouring Igor Frank is significantly larger in scale than those triggered by repatriates, although in-game tips provided about voidouts would suggest that this happens regardless of what type of BT it is, so long as it consumes a non-repatriating human. Higgs later forces Sam to confront his colossus directly, and in the ensuing fight it is shown to be able to manifest several other types of BTs as well. The "strands" attached to its arms are tipped with golden hands, which it can use to immobilize Sam and pick him up.

Unofficially named "gas bags", a type of creature manifesting in Edge Knot City. They are essentially large pulsating sacks with tendrils hanging from them, not unlike jellyfish. Some are stuck to the ground, while others float around in the air. When Sam gets close enough, the flying ones will start gravitating towards him, and after a certain amount of time, they will explode into tar, causing damage.

They can also be found floating over the tar belts at the edges of the Central Region map, these ones can be forced to go down with the usage of EX grenades.

A variant of these BTs manifests in the area north east of Port Knot City during episode 12. They possess a golden coloration and spikes, and when they are damaged, they will split into two smaller versions of themselves.

"Whale" comes from the Game Files. The name of this type of BT has not been officially confirmed.

A whale BT is a massive whale-like BT capable of flight. Many manifest in the Midwestern tar belt when Sam crosses on foot. Sam is forced to put a whale BT down before returning to Capital Knot City from Edge Knot City. The whale BT can attack with a chiral laser from afar, as well as fire golden gazer-type BTs as projectiles from within its mouth. 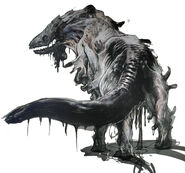