Bridges Corpse Disposal is a division of Bridges that focuses on collecting the bodies of the recently deceased and transporting them to Incinerator facilities far from the nearest cities and other settlements where they may be cremated before necrosis sets in and they become a BT, lest they cause a voidout.

Members are split into teams of 2 or so members, and typically wore the Bridges suit with a CDT patch on the right shoulder and the organization logo on the left as well their dispatch team number for identification. Bridges vehicle are given to traverse long distance to an incenerator, as well as a BB unit to help them traverse through BT 's infested territories. The colour assigned to this division is orange, as seen on the hazard suit uniforms of its members and their vehicles, and even on the cannisters that contain the BBs. 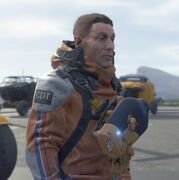 Igor, a member of CDT in his uniform with his BB unit.
Retrieved from "https://deathstranding.fandom.com/wiki/Bridges_Corpse_Disposal?oldid=7158"
Community content is available under CC-BY-SA unless otherwise noted.