Edit
watch 02:05
Wiki Targeted (Games)
Do you like this video?
Play Sound

A cryptobiote a day keeps the timefall away.
– Fragile

A cryptobiote is a small life form in the world of Death Stranding which, when ingested, replenishes a small amount of a person's blood. They seem to be capable of traveling between Earth and "the other side".

Cryptobiotes were not seen prior to the Death Stranding, indicating that they originate from the "other side".

The Novelist's Son will reward Sam with a jar of D-Cryptobiotes for completing some deliveries. He explains in a mail that the "D" stands for "Dream". 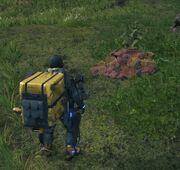 Sam looking at a coral hive 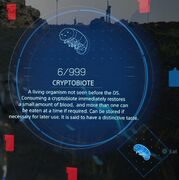