Junji Ito (appearance)
Yuri Lowenthal (voice)
The Engineer is a prepper and delivery recipient of Sam's.

The Engineer was born in a prepper shelter, where he has spent the entirety of his life.

The Engineer was the first prepper approached by Sam for expanding the chiral network from Lake Knot City to South Knot City, in light of Middle Knot City's destruction. The Engineer readily agreed to join the UCA, hoping to see the world he'd been missing. After joining, he provided Sam with a power skeleton as a token of his gratitude. 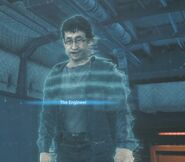 Add a photo to this gallery

Retrieved from "https://deathstranding.fandom.com/wiki/Engineer?oldid=10551"
Community content is available under CC-BY-SA unless otherwise noted.