Hideo Kojima is a Japanese video game designer, screenwriter, director, and producer, widely recognized as an auteur of video games. His most notable video games are the Metal Gear series of stealth games, as well as the adventure games Snatcher and Policenauts.

He founded the subsidiary Kojima Productions in 2005, after starting at Konami Digital Entertainment, where he rose to vice president in 2011. In 2015, Kojima Productions temporarily disbanded following company restructuring at Konami, and in December, Kojima's employment contract with Konami was officially terminated. On December 15, 2015, Kojima revealed that he had re-formed Kojima Productions as an independent studio, and was working with Sony on a PlayStation 4 exclusive.[1] At E3 2016, Kojima personally announced the game's title as Death Stranding.[2] 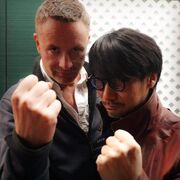 Kojima with the actor of Heartman, Nicolas Winding Refn

Kojima on the set of Refn's Too Old to Die Young

Retrieved from "https://deathstranding.fandom.com/wiki/Hideo_Kojima?oldid=7309"
Community content is available under CC-BY-SA unless otherwise noted.