Igor Frank was a member of Corpse Disposal Team 6 of the Corpse Disposal division of Bridges and the younger brother of Viktor Frank and a survivor of the Death Stranding. He was known for collecting little keepsakes and it was his dream to go West with the second expedition.

Igor Frank was a member of the Bridges Corpse Disposal, working under Corpse Disposal Team 6. In the aftermath of a suicide case, he was entrusted with delivering the body to the nearest incinerator. Since the road to the the incinerator had a high BT presence, he was issued a Bridge Baby, BB-28. Igor would reach out to Sam, since he required someone with DOOMS to gauge the condition of the body.

Igor then formed a contract with Sam, and they entered a truck to travel the incinerator. Eventually, they would enter a BT-infested area, experiencing Timefall. Their vehicle stalled for a short amount of time, and after starting again would be overturned by BTs, causing a crash.

After the crash, Igor attempted to rescue an injured colleague from the overturned vehicle. However, multiple BTs converged on the man, dragging him away, leaving Igor no other choice than to shoot him in order to prevent triggering a Voidout. However, Igor was soon cornered by BTs as well.

He passed the BB to Sam, telling him to run. He then attempted to commit suicide to prevent a Voidout. However, he was promptly grabbed by a BT, causing him to drop his gun, leaving him with no other option than to stab himself. Despite his efforts, he remained alive long enough to be eaten by a BT, triggering the voidout that destroyed Central Knot City, leaving only a crater, Sam, and BB-28, Igor's Bridge Baby. 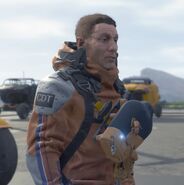 Igor meets Sam for the first and last time.

Igor prepares his pistol.
Add a photo to this gallery
Retrieved from "https://deathstranding.fandom.com/wiki/Igor_Frank?oldid=9471"
Community content is available under CC-BY-SA unless otherwise noted.