Léa Seydoux is a French actress who provided the English voice, French voice, appearance, and motion capture for Fragile in Death Stranding.

In 2013, she garnered widespread attention after being awarded the Palme d'Or at the Cannes Film Festival for her role in the critically acclaimed romance film Blue Is the Warmest Colour (2013), and later for her portrayal of Bond girl Madeleine Swann in Spectre (2015). 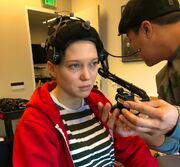 Seydoux during her motion capture session

Retrieved from "https://deathstranding.fandom.com/wiki/Léa_Seydoux?oldid=5127"
Community content is available under CC-BY-SA unless otherwise noted.