Lockne is a gifted technician who serves as the overseer of Mountain Knot City. She is the twin sister of Mama and one of the creators of the chiral network.

Mama and Lockne were identical twin sisters born with DOOMS that granted them the ability to communicate with each other irrespective of their locations. Gifted with great intellect, they soon found themselves as accomplished technicians, each responsible for creating half of the Chiral Network. Mama created the hardware, and Lockne wrote its software. Their equal genius and close bond was so great that many believed they were the "same person in two bodies".

Though the sisters share a great many traits, their few differences tend to stand in complete opposition to one another. For one, Målingen has never wanted kids, while Lockne loved them, but was infertile. At some point, Lockne was in a relationship with someone from Bridges I. Unfortunately, it ended tragically in accident. His sudden departure left her greatly depressed. However, he did have sperm frozen possibly in preparation of the unforeseen. Sensing her sister's distress, Målingen offered to be the surrogate mother of her child. Strangely, around the child's due date, Målingen suddenly cut off all communications with her and disappeared. Lockne was furious as she thought that Målingen had ran off with her child.

Some time later, Sam, in an attempt to repair the Chiral Network, had to reconcile the two. Carrying Mama to Mountain Knot City.

That's when Lockne learned the circumstances behind Målingen's sudden disappearance. On her child's birthday, there was a terrorist attack on South Knot City, and she became trapped under the hospital ruins while waiting for her C-Section to begin. She eventually did give birth to a daughter beneath the rubbles, but she soon died by suffocation, and became a BT. Oddly though, she was still bound to Målingen by a beached umbilical cord. Målingen's vital signs has already ceased by the time rescuers reached her. However, she stayed "alive" because her BT daughter is bound to its birthplace and deathplace, and Målingen through the umbilical cord. Mama decided that it was probably for the best to cut off communications with Lockne, as this news would surely bring about more suffering.

This revelation repaired the relationship between the two, but moments later Mama dies in front of her sister, because to get there she had to cut the link with the BT baby, also causing the end of her link with the world of the living. Moments after one of the Lockne's eyes turn blue, indicating that Målingen's soul entered her body and now two minds coexist in one body.

When the twins are finally together, they can repair the network in order to stop the last extinction.

After the Death Stranding, Mama and Lockne both realized that after their baby became a BT, they became depressed (similar to post-partum depression) and turned inwards to a life of isolation. With the UCA re-united, they remembered their original dream of going to space and pledge to do so.

Lockne is a reticent person because all of her loss. The first time we encounter her in the game, she seems only worried about the facility of Mountain Knot and tell us that she doesn't want to join the UCA.

When the soul of Målingen enters her body, she experiences a change in her personality: being more relaxed and funny like Mama was. But it's not really her own personality, but her sister that now coexists in the same body.

Lockne is almost physically identical to her sister Målingen, only more slender due to her sister's development during pregnancy. Her hair is also a darker brown, cut at shoulder-length and her eyes are hazel (Mama's are blue).

She wears a distinctive Bridges-issued vest-like blue coat that sports a high collar, that can slightly obscure her lower face, shielding her nose & mouth if necessary. Beneath that is a skintight gray bodysuit upper and black leggings. Both underlying pieces cling tightly to her body.

Lockne like her sister born with DOOMS. Alongside Målingen, she designed the Chiral Network. She wrote all the software for it and the Q-Pid. She's also directly in charge at Mountain Knot City while also taking over as Support for Sam, after Mama's passing, redesigning and developing some of Sam's equipment & weaponry.

In the end, her knowledge of the network is vital to repair it and avoid the sixth extinction. 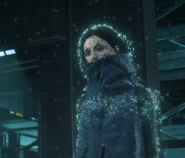 Add a photo to this gallery
Retrieved from "https://deathstranding.fandom.com/wiki/Lockne?oldid=10453"
Community content is available under CC-BY-SA unless otherwise noted.