She's my daughter... And I'm her Mama
– Mama to Sam about her BT baby

Cutting the cord link with her BT baby

Mama, real name Målingen, is a main character in Death Stranding. She is affiliated with Bridges and is the twin sister of Lockne. She is one of the greatest scientists in the UCA; inventing a plethora of gadgets and tools for porters to use. Additionally, She is one of the creators of the Chiral Network.

Mama and Lockne were genius twin sisters born with DOOMS, which gave them the ability to communicate with each other across the world. Together, they each made half of the Chiral Network: Mama, the hardware, and Lockne, the software. Their equal genius and close bond was so great that many believed them to be the "same person in two bodies."

However, Mama's ovaries were unable to produce eggs and Lockne's uterus was incapable of carrying a child to term. While both were initially accepting of these circumstances, Lockne eventually fell in love with a Bridges member and wanted to develop a relationship with him. However, he died in an accident, leaving Lockne depressed and suicidal. Mama could feel this, and wanting to help her, proposed to Lockne that they should "have a baby." Using the deceased's sperm, Lockne's eggs, and Mama's uterus, the two sisters were able to create Lockne a child that would be carried to term by Mama.

However, during a terrorist attack, Mama was crushed under the rubble of a hospital while waiting to get a cesarean section. She inadvertently survived by "giving birth on the other side", resulting in the baby manifesting as a harmless beached thing. Stuck for days drinking timefall, Mama was eventually rescued by Bridges, but could not leave the hospital, as she and Lockne's daughter were tethered to the accident site. In addition to this, Mama was no longer properly living, and hid this by leaving one of her cuff links off of her wrist, effectively hiding her vitals. Furthermore, Mama's bond to Lockne was severed, and in both fear and shame for what happened, Mama cut herself off from all communications with her, emphasising the rift between the twins.

Eventually, Mama's agreed reunite with her sister to repair the Chiral Network and stop the death stranding, but for that she must cut the connection with the BT daughter in order to leave her place. That's why she fabricates a cuff link with chiral crystals blade for Sam and orders him to cut the umbilical cord with her child.

When Sam does this, he sends the baby to the beach, but also left mama at the border of dead, because cutting the cord freed her but also terminated the link that kept her in the living's world. For that reason they rapidly went to Mountain Knot, but Higgs is waiting outside of the lab with a giant BT. Heeding Mama's advice to run, they successfully evade the BT, and begin their journey to Mountain Knot City.

Eventually they reached Mountain Knot with Mama almost dead, but just in time to have her last moments with her sister and explain why she cut the communication. Lockne forgives her and then Mama dies. When this happens, Lockne's right eye turns blue, indicating that the soul of Målingen entered her body, resulting in two minds in one person. Finally the objective of the mission its accomplished due to the fact that both sisters work together in order to try to stop the extinction.

Mama is one of the brightest minds in the UCA. A genius. This makes her have no concern in basic normal life like children's and relationships. She really doesn't want any kids, she only gets pregnant to help Lockne to conceive. Also she's one of the most humorous characters in the game, making sarcastic comments and bad jokes. The condition of her BT baby also makes her melancholic, and the loneliness derived of the situation increases that aspect.

Mama is a slim young woman with blue eyes, brown hair and white skin. She wears a bridges scientist uniform of one piece that covers the lower part of her body. She also wears boots. Curiously, her right pant leg is folded.

In the top part of her outfit, she has rolled up a uniform and tied it to her waist, revealing a white tank top underneath. She also wears glasses and orange earrings. Her odradek scan is always with her and is tied to her chest with straps.

This interesting outfit of hers combines work and casual, indicating her status of living in the same place where she has to work because of the BT baby.

Mama possesses DOOMS. She can perceive the BTs and see clearly to the other side. In fact, she was the one who saves Sam when he was stuck on the beach after he stops Amelie.

Besides her DOOMS affliction, she is a genius scientist. Mama was one of the creators of the Chiral Network along with Lockne. Mama also invented the majority of the porters' equipment by herself.

Throughout the game she provides and upgrades most of Sam's weapons, suit parts, gadgets, vehicles and structures. Besides all this, she has a deep knowledge of the Death Stranding, Extinction, BTs and other phenomena that occur in the DST universe, making her an eminence in the matter.

Considering the aforementioned number of her inventions and her knowledge, it is possible that she was the single greatest mind in the UCA. 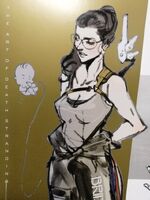 Målingen's ka fused with Lockne right after her death
Add a photo to this gallery
Retrieved from "https://deathstranding.fandom.com/wiki/Mama?oldid=10903"
Community content is available under CC-BY-SA unless otherwise noted.