The Odradek Terrain Scanner is a shoulder-mounted, articulated mechanical sensor used by individuals venturing into the dangerous lands transformed by the Death Stranding.

The Odradek primarily serves as a multi-function scanner, able to analyze terrain as well as detect cargo tags and objects left by other players. The device typically remains in its stowed position unless manually activated, or connected to a BB pod - after establishing a connection to the BB, users are able to use Odradeks to detect BTs. However, Odradeks can function without a connection to a BB.

Odradek scanner technology is utilized throughout the world by various groups, primarily by Bridges operatives and freelance Porters. Odradeks are used by enemies of Bridges as well, such as Higgs and the MULEs. Bridges operatives possess a variant with five-pointed symmetrical design akin to a star, while Porters and MULEs are seen to use a smaller three-pointed variant. Some individuals, such as Homo demens and Mama, possess unique Odradek variants. It is possible that Odradeks were originally Bridges-made technology, which was licensed to or copied by others.

In the presence of BTs, the Odradek is activated automatically when a user is connected to a BB pod. Its panels or 'flaps' illuminate and can take on a variety of shape and color patterns, indicating the direction of and proximity to nearby BTs; the quicker the Odradek claps, the closer one is to a BT. Rapid spinning indicates a BT that is dangerously close by. As with the color-coded lights on Cuff Links and other Bridges technology, the illuminated panels will change from blue to red to additionally indicate proximity to BTs.

If Sam is caught by Hunter-type BTs, the Odradek can sometimes be seen 'jumping' up, as if in surprise. It may also arrange itself to 'point' in the direction of Hunter BTs who are chasing Sam. In the presence of Catcher-type BTs, the Odradek is seen to arrange into a shape akin to that of a "＋", or a cross - curiously, this same form can also be observed when Sam connects the Q-Pid to Chiral Network terminals. If Sam manages to defeat a Catcher, or otherwise escapes BT territory, the Odradek will often take the shape of a human hand and 'wave goodbye', or even clap and give a thumbs-up gesture. Sam's Odradek can even take the shape of a mobile to help calm BB down.

If BB becomes stressed to the point of suffering from autotoxemia, terrain scanning features can still be used, but BTs can no longer be detected and the Odradek will hang limply.

Eventually, Sam's Odradek can be upgraded with a new functions. The first upgrade received is a hologram generator. This can be used to create a hologram of a boulder; hiding inside this hologram will render the user undetectable to enemy scanners, however care should be taken as the hologram can become visually unstable if it collides with terrain features such as rocks or trees. Sam's Odradek can also be upgraded to detect living humans during scans, in addition to detecting cargo tags.

In certain scenes, pressing Up on the D-pad allows Sam to activate the Odradek's built-in flashlight. The light automatically tracks with Sam's view. 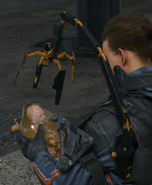 Sam's Odradek, acting as a mobile for BB

Variant used by Higgs and the Homo demens 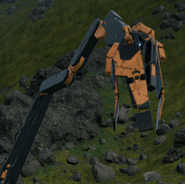 Malfunctioning due to BB suffering from autotoxemia 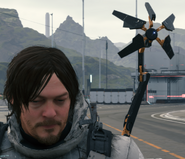 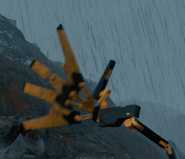 The Odradek 'pointing' towards BTs
Add a photo to this gallery
Retrieved from "https://deathstranding.fandom.com/wiki/Odradek?oldid=8600"
Community content is available under CC-BY-SA unless otherwise noted.