A reverse trike is a vehicle Sam can use. It can travel at high speeds across flat and rugged terrain. Should Sam find himself in a dangerous situation, a reverse trike serves him well in making a quick getaway.

The reverse trike comes in many variants. Early on in the game players will be able to fabricate the standard variant. Shortly after there is a long-range variant. This forgoes the extra storage and in its place has 2x extra batteries for distance.

The reverse trike can accommodate a variety of cargo, but the ultimate volume is 2x3 (2 units along the chassis, 3 units deep, on each side.) When carrying heavy weights the battery will diminish quicker, especially in water and on inclines.

When damaged during travel or deteriorated by the Timefall, the reverse trike can be stored in a garage for repairs.

The trike is called Triskelion MC 600v in Concept Art

A render of the Ride with Norman Reedus reverse trike 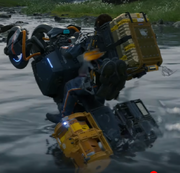 Pop a wheelie to overcome some obstacles

Retrieved from "https://deathstranding.fandom.com/wiki/Reverse_Trike?oldid=10525"
Community content is available under CC-BY-SA unless otherwise noted.